Nunki (pronounced NOON-key) is a Babylonian name given to a hot blue star in the belt of the Milky Way, in the direction of our galaxy’s core. One of the equatorial stars of the western hemisphere, it’s easiest to see as it arcs across the southern sky on summer nights. It is the second brightest star in the constellation Sagittarius, the constellation of the Zodiac that holds the Winter Solstice.

Nunki may be 228 light-years from Earth, but if it were as close to us as the sun, it would appear five times larger and shine more than 600 times brighter. That’s just how it would look if we could stand to look at something so bright. The light of Sigma Sagittarii (its more formal name) is mostly invisible ultraviolet; the star is actually 3300 times more luminous than our Sun. This would render tanning beds virtually obsolete.

Nunki is one among fifty-eight designated celestial navigational stars memorized by aviators and mariners to supplement or replace gyrocompass measurements. ‘Sighting’ the stars as known points, latitude can be determined using angles between them and the horizon, and position is determined through triangulating. 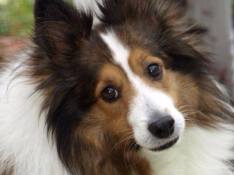 Nunki is also the name of my childhood pet Shetland sheepdog, who was named by my father, who is a veteran Captain of the Air Force, 28th Bomb Squadron, navigating the Boeing B-52 Stratofortress.

Nunki is not my surname.

4 Responses to What’s a Nunki?